Have you ever wanted to see a famous landmark or a potential event venue overseas, without actually having to spend the time, or money to travel?  Founded by Nihal Advani, Georama brings you the world’s first real-time virtual tour platform! This amazing service can help anyone travel anywhere in the world instantly.

With Georama, viewers will be able to virtually travel anywhere in the world in real-time via mobile and interactive live video tours. To make the experience even more personal, viewers can pay a small fee to interact in real-time by asking questions or making suggestions to their respective guides, such as asking them to check out certain landmarks. 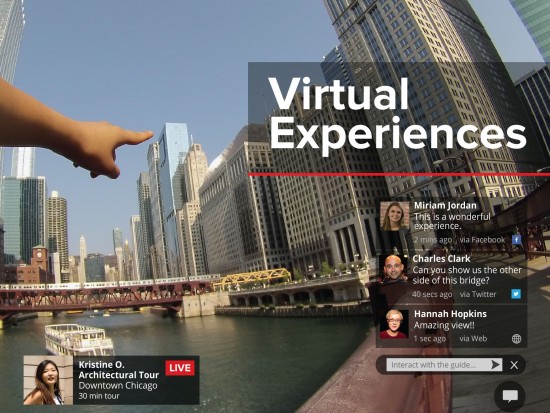 Instantly Experience The World With Georama!

With Georama, viewers can tune in live across their phones, computers, and tablets to view the tours and interact in real-time. You can request a live demo to learn more about Georama and how it can help your organization. Why we love it:

Georama provides one more thing we can all use for site selection for overseas events. Not only can it save us time, but also traveling expenses! With its seamless integration feature, we can easily share these tours to potential clients, friends, or family. We believe that Georama will in no time become the “the destination for virtual travel”!

Where are you going to travel with Georama? Let us know in the comments below or on Facebook and Twitter!

Almost every year, Nikki Wheeler flies to New York City to watch the U.S. Open – but this year she’s also bringing her niece along with her to visit colleges.

“I’m actually taking her to New York for her college tour in September since I usually go to the U.S. Open,” says the Denver resident. “I’ve already booked it and it’s already $2,000 apiece to go – and that’s with the hotel and airfare.”

Wheeler decided on a vacation approach to combine expenses, giving her 15-year-old niece a couple of days in the city to form an idea of what it’s like to live and go to school there.

“I’m fortunate that I have a great job and can set aside money for a family vacation,” says the media executive, who spends $2,000 a month to help her other niece and nephew pay for college.

Visiting a campus can be a great way to determine if a college is the right fit, experts say, but it’s often not cheap.

“You don’t want to spend so much money on college tours that you are pulling away from valuable money that you’re earmarking to pay for school,” says Peg Keough, a wealth advisor and founder of college planning firm Way to the Quad, based in Bellevue, Washington.

It’s not unusual for someone to spend $3,000 on travel, food and lodging costs before selecting a school to attend – although some families spend less, college financial planners say.

Experts say budget-savvy families can spend less than $1,000 by limiting visits to fewer schools and learning about campus preferences by touring colleges locally.

Narrow the List of Schools to Reduce Time and Costs

One way to reduce costs is to drill down a short list of more likely schools – which eliminates over-visiting colleges, says Sean Moore, founder of college financial planning service SMART College Funding based in Boca Raton, Florida, who advises keeping the list to less than five schools.

While taking virtual tours and exploring online are good steps, families should still set foot on campus, says Moore. “Make sure it’s a school you’re truly interested in. Just because the school has a great name is not a good enough reason to visit.”

Before planning the trip, Wheeler made sure her niece had the grades to be accepted to New York University – the high school junior’s top choice.

But determining a school that is a good fit for a prospective student goes beyond GPA and test scores – it’s also about preferences, college planners say.

[Check out this infographic on how to prepare for your college campus visit.]

Financial college consultants recommend visiting schools within a short driving distance to learn about campus preferences – especially if that student is on a tight budget.

Sonia Torres, with Summer Search, a national nonprofit headquartered in San Francisco that works with college-bound high school teens, says visiting a local school – even if it’s not on the list – helps a student understand a college type.

Visit Colleges That Are Best Bets for Acceptance

College planning consultants advise families to plan a campus tour at least three months ahead of time – as official tours often book up – and look at schools where acceptance is probable.

Michael Schiferl, of La Grange, Illinois, says he took his daughter Anna, 17, on an inexpensive road trip touring schools in the Midwest last summer for around $500.

Before hitting the road, his daughter determined that she was only interested in major universities in the Midwest as well as Pennsylvania State University—University Park.

“We also didn’t visit schools we thought there was no statistical chances of being admitted – so not trips to Harvard or Stanford just to say we went there,” Schiferl says.

His teen chose Purdue University, after 10 official campus tours and several nonofficial school visits, and is enrolled for this fall.

Schiferl says they kept expenses to a minimum, eating at university dining halls or fast food restaurants, filling up the car several times and staying at inexpensive roadside inns.

One of the biggest expenses – whether traveling by car or plane – is lodging, says Moore, from SMART College Funding.

Food per day is relatively inexpensive at around $20 per person unless it’s in New York City or Boston, says Keough from Way to the Quad, who adds that most college towns are typically cheap for food.

“A thousand dollars is plenty of money if you’re going local and driving. But if you’re applying up and down the East Coast, then $2,000 is going to be pushing it,” she says.

Visiting schools in expensive cities typically costs at least $2,000 for a single trip, wealth advisors say, but families can cut costs by staying in an outlying area.

Some schools, college planners say, offer “fly-in” programs where lodging and meals are provided to prospective students. These programs are usually limited to those from underrepresented or low-income backgrounds. For example, Carleton College in Northfield, Minnesota, brings around 60 high school seniors to campus every year with all expenses paid through its Taste of Carleton program.

“Some schools have funds that will bring kids in to visit,” says Kat Cohen, founder of IvyWise, a higher education consulting firm based in New York City. “Definitely call the school; they may make it happen for you.”

Another strategy for people who can’t afford to tour faraway college campuses is to wait until being accepted, college planners say.

“If money is tight and you can’t do the initial one, then hold off until you get in,” says Keough, who urges students to visit the college where they plan to attend. “Do local – which is cheap. And once they get into schools, that’s when you hop on a plane.”

Schiferl says his daughter toured some schools after being admitted and used a virtual tour of Purdue to pick out her dorm room instead of driving 130 miles to revisit the campus.

“You got to go visit if you’re going to spend the next four years of your life there,” says Keough. “Somehow you’re paying for it. And it’s a lot of money,”

Searching for a college? Get our complete rankings of Best Colleges.